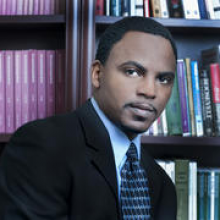 Daniel Q. Gillion completed his Ph.D. at the University of Rochester. He later went on to serve as the Ford Foundation Fellow and the Robert Wood Johnson Health Policy Scholar at Harvard University. His research interests focuses on racial and ethnic politics, political behavior, public policy, and the American presidency. Professor Gillion's first book The Political Power of Protest: Minority Activism and Shifts in Public Policy (Cambridge University Press) demonstrates the influential role of protest to garner a response from each branch of the federal government. The Political Power of Protest was the winner of the 2014 Best Book Award from the Race, Ethnicity, and Politics Section of the American Political Science Association. Professor Gillion's recently completed book Governing with Words: The Political Dialogue on Race, Public Policy, and Inequality in America,  demonstrates that the political dialogue on race offered by presidents and congressional members alters the public policy process and shapes societal and cultural norms to improve the lives of racial and ethnic minorities. Professor Gillion's research has also been published in the academic journals Electoral Studies and Journal of Politics as well as in the edited volumes of Oxford Handbook of Political Behavior. In addition to being a faculty member in the political science department at Penn, Professor Gillion is an affiliate faculty member with the Department for Africana Studies and the Center for Asian American Studies Program.